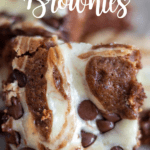 Easy-to-make Cream Cheese Brownies have a chocolate layer, topped with a cream cheese layer. Both layers are then swirled together and sprinkled with chocolate chips to create an insanely tasty brownie.

How to make Cream Cheese Brownies

One of my favourite things about this recipe is that it makes a big batch- 24 brownies! This is the perfect recipe if you need to bring something to a potluck or a bake sale.

These Cream Cheese Brownies are baked in a 15 x 10 x 1-inch jelly roll plan which is a bit different than a traditional square 8x8-inch pan brownie.

My son, Troy helped me make these brownies. I love it when my boys ask if they can help bake in the kitchen. I've noticed that my volunteers seem to come out of the woodwork once the chocolate chip bag hits the counter. 🙂

These brownies have two layers and a chocolate chip topping.

Grease and flour the jelly roll pan and preheat the oven to 375F.

Begin by mixing the butter, water and chocolate in heavy-bottomed saucepan. I used my Dutch Oven and it worked perfectly. Melt over medium heat. Stirring constantly is a must as the chocolate melts.

The temperature is then raised once everything has melted. Continue to heat just until it reaches a boil. Immediately remove the pot from the heat and set it aside once it has reached a light boil.

In a separate bowl, combine all of the dry ingredients for the bottom brownie layer. Add this to the cooled chocolate mixture and stir well to combine.

In a small bowl, combine sour cream and egg. Mix well and add to the chocolate mixture stirring just to combine.

Pour the mixture into the bottom of the prepared jelly roll pan. Try to pour it as evenly as possible in all areas of the pan. This will make it easier to spread out in the large pan.

You should take your cream cheese out of the refrigerator about an hour before baking. This will allow it to soften at room temperature. Removing it from the package and covering it lightly with plastic wrap will speed up the process as well.

I like to use my Kitchen Aid stand mixer for the cream cheese layer. You can also use an electric mixer. Combine the cream cheese and sugar. Beat on medium-high speed to dissolve the sugar. Add in the egg and blend it well to combine.

This batter will be very runny and will pour easily over the chocolate layer.

Next, comes the fun part. Take a knife and being careful not to scrape the bottom of your pan, gently swirl the chocolate and cream cheese layers together.

Sprinkle the chocolate chips over the top and it's ready to go into the oven.

I have a gas oven and it baked perfectly in exactly 25 minutes. Remove the brownies from the oven and let them cool on a rack for at least 20 minutes before cutting them.

These brownies are best served after they have cooled for awhile.

They also taste delicious the next day. I will admit that I may have had one with a cup of coffee this morning as I was typing this blog post 🙂

Store leftover brownies in a covered container in the refrigerator for up to five days.

Looking for other great dessert recipes? Check these out

Easy-to-make Cream Cheese Brownies have a chocolate layer that it topped with a cream cheese layer. Both layers are then swirled together,  sprinkled with chocolate chips to create an insanely tasty favourite brownie.

2. In a medium heavy-bottomed saucepan, combine butter, water and chocolate. Melt over medium heat, stirring constantly. Gradually allow the mixture to come to a boil by raising the temperature slightly. Remove from heat as soon as it comes to a boil.

5. In a small bowl, combine eggs and sour cream and mix well, then add to chocolate mixture, stirring just to combine.

7. In a medium-sized mixing bowl or bowl from stand mixer, combine cream cheese and sugar. Mix on medium speed for one minute until sugar is dissolved.

8. Blend in egg and mix until well-blended.

10. Using a knife, cut through the batter and swirl to create a marbled effect.

13. Cool for 20 minutes before cutting into squares.

14. Store in covered container in the refrigerator for up to five days.