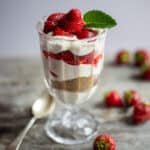 2. Gently stir cleaned strawberries in 2 tbsp. of sugar. Set aside in refrigerator.

2. Mix slowly to combine, then mix on medium-high speed for one minute until well-blended and smooth.

4. Beat at medium speed  for one more minute.

If using hand mixer, begin the whipped cream in a clean bowl.

Make sure to rinse the stand mixer bowl in very cold water so that it's chilled enough for the next step - whipping the cream.

2. Beat on medium-high speed of mixture until medium peaks form. Keep a close eye on the cream. It will turn to butter if you leave it too long!

1. Gently fold whipped cream into the cream cheese mixture. Fold only until combined.

There is no right or wrong way when layering these parfaits. You can repeat the graham crumb layer on the top if desired.

Any seasonal fresh berry can be substituted for the strawberries.