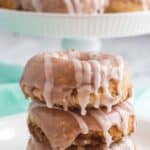 If you love cinnamon rolls then you're going to love these Cinnamon Roll Donuts! These donuts are quick and easy to make with simple ingredients and taste amazing with a hot cup of coffee!

This is the second baked donut recipe in a week. I think we are a little obsessed !

After the baked blueberry cake donuts received rave reviews, I was so inspired to create other flavours.

Today, I'm sharing these cinnamon donuts and friends, they are a-maz-ing.

If this is your first time making baked donuts, you will find that they are so easy to make. No hot oil for these donuts, they're baked in a donut pan in the oven.

Also inspired by my no yeast cinnamon buns, you're going to love how the crunchy cinnamon topping becomes the bottom of the donut!

The tops of the donuts are dipped in a cinnamon glaze, then drizzle with an optional plain white glaze for a more decorative finish.

I hope you will enjoy these as much as we did!

Trust me here, you're going to want to make a double batch of these delicious donuts!

why this recipe works

You can find a full printable recipe with quantities at the bottom of this page. Below is a few notes about the ingredients for this recipe:

I like to use the Wilton donut pan with six donut molds for my baked donuts. Lightly grease the donut molds or spray with non stick spray.

You can mix the donut batter entirely by hand for this recipe.

In a separate medium-sized mixing bowl, beat the egg, then add in buttermilk, melted butter and vanilla.

Transfer batter, in three separate batches to a decorating bag or ziploc bag.

Once filled, cut a hole in the bottom of the bag that is just a bit smaller than the width of the donut shape.

Pipe the cinnamon donut batter into the donut cavities in the greased donut pan.

I find the best way is to use the bag. Alternatively, you can spoon the batter into the greased donut pan by hand using a spoon.

Make the streusel: In a small bowl, combine flour, brown sugar, butter and cinnamon. Mix until crumbly and sprinkle a small amount on top of each donut.

Bake in 350°F oven for 15 minutes. The edges will be a very light golden brown and you can test with a toothpick to ensure that they are cooked throughout.

Cool in pan on wire rack for 5 minutes, then carefully remove donuts from pan and set on wire cooling rack while you prepare the glaze.

For the glaze: In a medium bowl, whisk together powdered sugar, vanilla extract, milk and cinnamon.

You may need an additional tablespoon of milk, or a bit more powdered sugar to achieve the right consistency.

The glaze should be thin enough that you can easily dip and remove the donuts from.

For easy cleanup: Place plastic wrap or parchment paper under the wire rack to catch the mess from the dripping glaze.

One at a time, dip the top of the donuts into the glaze and allow the glaze to drizzle off a bit, then place on wire rack.

Optional: To match the donuts in the photos, I made a very small amount of plain glaze with powdered sugar and milk to drizzle on top and give it the white contrast against the brown cinnamon glaze. You can drizzle it with a spoon or pipe using an icing bag.

Store donuts in an airtight container. If stacking them, place between layers of parchment paper.

Cream Cheese Icing - for a change, spread cream cheese icing from this banana bread recipe on top of cooled donuts.

Plain Vanilla Glaze - instead of the cinnamon flavoured glaze, omit the cinnamon and opt for a plain vanilla glaze.

If you don't want to frost/glaze the entire donut, you could simply use a piping bag to drizzle a smaller amount of glaze on top of the donuts.

These easy Cinnamon Bun Donuts are so quick and easy to make! Soft and moist with a delicious cinnamon glaze, you won't miss cinnamon rolls when you try these delicious donuts!

Did you make this recipe? Let me know! Cancel reply

Hi, I'm Sandra! Welcome to my kitchen. A self-taught cook, I love being in the kitchen. My inspiration is the people who I love the most - my family. Here you will find simple family recipes to enjoy year round.  More about me