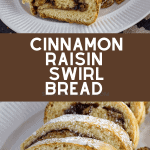 A soft crust swirled in a brown sugar filling with pecans, raisins and cinnamon is delicious with a pat of butter and perfect for French toast!

How to make this recipe

This Cinnamon Raisin Swirl Bread has lazy weekend written all over it. This bread is delicious on its own or with a light spread of butter on it. Absolutely delicious when its warm and fresh from the oven! The aroma is heavenly.

Since you are using instant yeast, the bread will only need a quick ten-minute rest. During that time you can mix up the filling and tidy up the mess. The dough is then rolled out into a rectangle, spread with butter and topped with a brown sugar filling that is loaded with chopped pecans, raisin and cinnamon.

Next, roll it up on the long side, pinch the edges to seal and let it rise for an hour. I would probably put my feet up and start a Hallmark Christmas movie and read Debbie Macomber's latest novel......if I had it. I know for a fact it's going in my stocking from Santa 🙂 Yay!

The loaf bakes for around 35 minutes and needs just a little cooling before you dust it lightly with some icing sugar. Trust me when I say that this Cinnamon Swirl Bread is EASY & DELICIOUS!

I recommend eating it on the first day. It's tasty on the second day, but definitely to-die-for when it's first-day-fresh. Wrap it in plastic wrap to store it for up to three days.

My boys went absolutely nuts over it the next morning. I sliced four thick slices and dipped them into beaten eggs and cooked it in the griddle for about two minutes per side. A light helping of maple syrup and you will have the most delicious French toast!

Don't forget to pin this recipe!

A soft crust swirled in a brown sugar filling with pecans, raisins and cinnamon is delicious with a pat of butter and perfect for French toast!

2. In a small saucepan, heat milk until it is hot, but not boiling. Remove from heat when it reaches 125F.

3. Turn on mixer to low speed and alternately add in the eggs and the milk. Knead for one minute. The dough will form into a ball.

4. Place the dough in a greased medium-sized mixing bowl, turning to grease all over.

5. Cover with a clean cloth and allow to rest for 10 minutes.

7. On a lightly floured surface, roll out the dough into a 12- x 9-inch rectangle.

8. Using a pastry brush, spread with butter, leaving a ½-inch area around the rectangle.

9. Sprinkle the filling evenly over the butter. Pat it down very gently.

10. Starting on the long side, roll up dough jelly roll-style. Pinch ends together to seal. 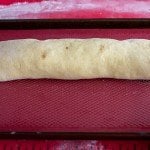 11. Place on a parchment paper-lined or greased baking sheet. (You may also use a silicone baking mat)

12. Cover with a clean cloth and allow to rise for 1 hour. The dough should be close to doubled in size.

13. Beat egg yolk with milk and brush over loaf.

15. Bake for another 20 minutes. (Bottom of loaf should sound hollow when tapped)

16. Cool on rack for 10 minutes, then lightly dust with icing sugar.

Store cooled loaf in plastic wrap for up to three days.

Did you make this recipe? Let me know! Cancel reply