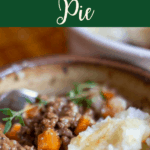 A savoury beef layer with vegetables topped with creamy, buttery mashed potatoes. The ultimate comfort food. You will love how easy this Beef Shepherd's Pie is to prepare.

Growing up, we ate the French Canadian version of Shepherd's Pie called Pâté Chinois. Made with ground beef, a creamed corn and mashed potatoes on top it was always a family favourite meal.

Later, I discovered the English and Irish versions, otherwise known as Cottage Pie and Shepherd's Pie.

Traditionally, Shepherd's Pie contains lamb and is an Irish specialty. Cottage Pie is English and made using beef.

In North America, many people refer to Shepherd's Pie as the version with beef. It depends which region you are in. Either way, it's delicious and the ultimate comfort food.

How to Make Beef Shepherd's Pie

Peel the potatoes and cut into quarters. Place in a large pot of lightly salted water and boil for 15-20 minutes until they are fork-tender.

The potatoes will cook while you prepare the bottom beef layer. Making both layers at the same time makes this a quick and easy family dinner.

Below is a tip that I use when making Shepherd's Pie. If you don't have a kitchen scale to weigh the potatoes, simply lay them out in your casserole dish as you're peeling them to get an idea of how much you'll need.

I have two pounds of potatoes in the photo below. I like a nice thick layer of potatoes on my Shepherds pie 🙂 So, 1 and ½ to 2 pounds. will do it.

In a large skillet, brown the ground beef with the chopped onion and garlic. You can also grate the onion with a cheese grater. Use medium-high heat.

I use extra-lean ground beef. If you're using a higher fat version of ground beef, drain off any of the fat left in the pan when it's done cooking.

I have a fussy eater who will pick out onions (insert eye roll) unless I make them small enough so that he can't see them. A cheese grater works best for this, or a food chopper.

This is the same boy, Austin who said he wouldn't eat peas for a thousand dollars during an interview for an agency recruiting for tv commercials. He picks the peas out of my Shepherd's Pie. I got over it 🙂

Stir in the dried thyme and flavour with salt and pepper. I have not specified an amount of salt because it will really depend on what type of beef stock you use (low sodium or not?) and whether you use salted or unsalted butter, etc. So, a few turns of the salt grinder and a few generous turns for the pepper.

Next, stir in the flour. Mix well. Add the beef stock, Worcestershire sauce and frozen vegetables.

Let this mixture simmer for 15 - 20 minutes stirring often. The mixture will be fairly thick. Taste and adjust the seasoning adding more salt & pepper.

Spread the mixture into a 10-cup casserole dish. Set aside.

If the timing works out, the potatoes will be drained before, or very close to the same time that the meat mixture is done cooking. Keep a close eye on the potatoes. You do NOT want water-logged mashed potatoes. Been there, done that. Not tasty.

For this recipe, I would recommend using Russet potatoes or Yukon Gold Potatoes.

There are many variations to making the best creamy mashed potatoes and you can adjust this recipe in several ways.

The ultimate is to use ¼ cup of salted butter and ¼ cup of half and half cream OR 2% milk.

Mash until it is nice and creamy. The creamier the potatoes are, the easier they will spread on top of the meat mixture.

Spread creamy mashed potatoes on top of the meat mixture.

Run a fork through the potatoes making vertical lines, then run the fork through the other way. There's no right or wrong way here 🙂 Those little bits that stick up get nicely browned and are so tasty.

Drizzle 2 tbsp. of melted butter over the top.

What to serve with Beef Shepherd's Pie

It's quick and easy to make and delicious when served warm from the oven!

Salt and pepper to taste

¼ cup half and half cream

Fresh thyme for garnish once cooked.

Note: Begin with the mashed potato layer. They will cook while you are preparing the beef mixture.

1. In a large skillet over medium-high heat, brown the ground beef with the chopped onion and garlic.

2. Stir in the dried thyme and flavour with salt and pepper.

6. Taste and season with salt & pepper.

7. Spread the mixture into a 10-cup casserole dish. Set aside.

1. Peel and quarter the potatoes .

2. Place in a large pot of lightly salted water and bring to a boil.

5.. Add in the cream and continue to mash until a nice, creamy, spreadable texture is reached.

6. Spread potatoes on top of beef mixture in casserole dish.

7. Drag fork through the potato mixture, creating a design.

8. Drizzle 2 tbsp. of melted butter over top of potatoes.